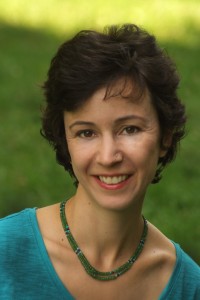 Hi, I’m Edya and I’m here to help you feel better living in your body.

Most people who take my classes don’t even know that I’ve been to India twice to study yoga, or that I’ve been teaching in various capacities for more than 20 years. They just know that I help them connect with their bodies in a brand new way, guide them gently and clearly through amazing sequences of MELT and Yoga, and that they float out of the room after class.

In that moment where my students roll over and sit up at the end of class, I can see a new lightness and energy in their faces. They are often incredulous that they can feel this good, that they have less or no pain, that they move so easily and joyfully. They email me the next day to say how great they still feel, or how deeply they slept. They say, “how long will this last?” I say, “learn to do this on your own, take care of yourself consistently, and you can feel this great everyday.”

I want that feeling for you too.

In both high school and college, I studied art history. I took my first job at the Museum of the City of New York after realizing that I loved telling the stories of average people more than teaching about the paintings of famous ones.

A few years later, I found myself impersonating one of those average people, a young immigrant girl from Turkey, named Victoria Confino. She lived in a small one-room tenement apartment with her parents, brothers and sisters, now the site of the Lower East Side Tenement Museum. In full costume as Victoria, I cautioned my wide-eyed visitors (mostly school groups, families and tourists) about looking like they were “fresh off the boat” at Ellis Island, and offered advice about how to find employment in the piece-work (sweatshop) industry. I taught them how to wind up the Victrola and we danced to “Second Hand Rose” together. The year was 1916. 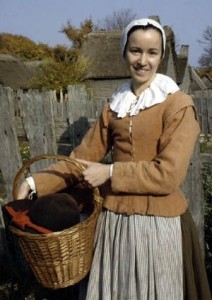 After receiving my Masters Degree in Museum Studies from NYU, I time-traveled again, to the year 1627. I became a “Pilgrim” at Plimoth Plantation, in Plymouth, MA, complete with wool petticoats, a boned corset, and a linen coif on my head. Role-playing as an English Colonist, I welcomed hundreds of tourists to my house daily while I went about my chores: simmering pease pottage, mending a handkerchief, planting corn in the fields, or weeding in my kitchen garden.

It was in Massachusetts that I discovered yoga. I didn’t know much about yoga except that it made me feel good after a long day of wearing an uncomfortable corset. I went to class everyday in a small local gym, and soon enough, was asked to substitute teach.

A few months later, I said goodbye to my beloved Pilgrim life, and went on a pilgrimage to India to study yoga.

India was gorgeous and ugly, delightful and terrible, joyful and painful, truly a land of extremes. Some of the conditions were familiar to me from my Tenement and Pilgrim days. Poor lighting, dirt floors, cramped conditions, disease, just getting by – these were things I understood more than the average tourist.

After receiving my yoga certification at the Sivananda Ashram in Neyyar Dam, I traveled and volunteered for four months. I was often sick and scared, and once again yoga made me feel good when my head was spinning and my stomach was churning.

Upon my return in June of 2005, I began to teach yoga in my native New York. While I knew the poses well enough, I felt helpless when students asked me what to do about their chronic pain. And after my difficult travels in India, I was still in a recovery period myself, with a torn hamstring and a heaviness in my legs that no doctor could explain. I needed to know more to help myself as well as my students.

One day, I googled “yoga anatomy” and found The Breathing Project, a unique non-profit organization for yoga teachers to expand their knowledge of anatomy, kinesiology and of course, the mechanics of breathing. It became my home-base for 5 years, first as a work-study student, then as Manager of Education. Through my incredible teachers, Leslie Kaminoff and Amy Matthews, I learned about the relationship of breath and awareness to movement and function.

As I deepened my study of the body at The Breathing Project, connective tissue kept coming up. We saw videos of this tissue and its key role in the body. Then, in 2006, I stumbled upon a description of a class called MELT at the JCC in Manhattan that mentioned connective tissue. One week later, I lay on a MELT roller for the first time and experienced a radical change in my body. I undertook an intensive course of study with MELT Founder Sue Hitzmann, which culminated in my becoming a Master Trainer in 2015. I was honored to be able to teach MELT trainings alongside her and the other Master Trainers in the “MELT University” until 2018. 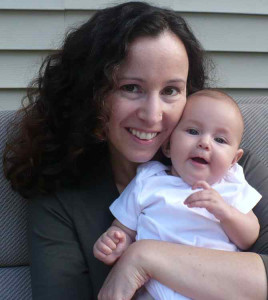 My journey changed again when my daughter, Swan, was born in 2010. Taking care of myself became a far greater challenge than I anticipated, especially as a working mother. I developed new skills to creatively include MELT and Yoga in my busy routine, and now Swan and I can be found rolling around on yoga mats and MELT rollers to our great mutual delight.

Since 2013, I have also been studying CranioSacral Therapy (CST) with the Upledger Institute, the leading school in light-touch therapeutics known around the world. I am thrilled to be adding this extra dimension to my classes, workshops and private sessions. The themes of being gentle with your body and respecting it’s inner wisdom has carried through all these modalities and deepened my understanding of Yoga, MELT and CST.

Before the pandemic, I taught classes, workshops and special programs at yoga studios, fitness centers, physiotherapy offices, and community centers throughout New York City. I hope to return to my in-person classes when it is safe t do so. For now, I am pleased to teach weekly classes and private sessions via Zoom.

Looking back, my early experience as a museum educator telling stories and sharing details in a fun and engaging way still serves me well in my role as a Yoga Teacher and MELT Instructor, and now light-touch Bodyworker.

It would be my honor to serve you as well.