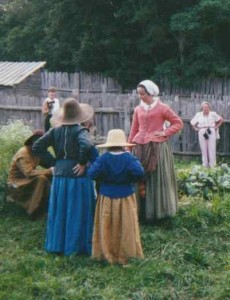 A little Thanksgiving fun while you pass the cranberry sauce!

1) There were Pilgrims and Indians at the First Thanksgiving: TRUE or FALSE?

2) The Pilgrims came to America for religious freedom: TRUE or FALSE?

3) The First Thanksgiving in the New World happened in Plymouth, MA in the year 1621: TRUE or FALSE?

4) They ate turkey at the First Thanksgiving: TRUE or FALSE?

5) The Pilgrims had a peace treaty with the Indians: TRUE or FALSE? 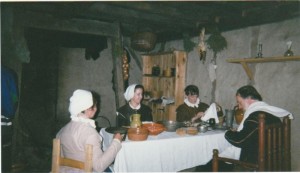 But more accurately, there were “English Colonists” and “Native People” at the harvest celebration that is documented in the late summer of 1621 in Plymouth, Massachusetts. The primary sources do not clearly state that the Natives were invited, only that they showed up (party-crashers?) and they certainly do not suggest that the two cultures ate at the same communal table. Think about it, if you were a 17th century Englishwoman, you would probably not want to be anywhere near a Native man who was dressed in animal skins and did not speak a word of English (and there is no mention of Native women attending.)

So lets first talk about the word “Pilgrim.” In his autobiography, William Bradford, the first governor of Plymouth Plantation said famously “they knew they were pilgrims,” but the term didn’t become popular until the early 1800s. Bradford was only referring to his particular congregation of religious Separatists who had been living in Holland after being persecuted in England.

Some important things to note here:

There were two other groups of Mayflower passengers who did not belong to this congregation. One group were the Puritans, who saw problems in the Church of England but did not want to throw out the baby with the bathwater. Rather, they wanted to “purify” it. The Puritans were not Separatists. Separatists wanted to separate from the Church of England and start fresh. This was considered treason in an era where the head of the Church was the head of the State. So the Separatists were persecuted, but the Puritans were not.

Although persecuted in England, these particular Separatists had plenty of religious freedom in Holland. But it didn’t feel like home – the English were conservative and uptight back then too, and the Dutch were just as liberal. In addition, they struggled to make ends meet, and there was the promise of land and economic success in the New World. So that’s how they ended up sailing to America. Just as today, immigrants came for a better life.

The third group of travelers on the Mayflower were Loyal to the Church of England and were neither Puritans nor Separatists.

The idea of a celebration for the harvest is a very ancient tradition, and the Native Peoples in North America had been holding such celebrations for thousands of years before any Europeans arrived. But even if you look at the Europeans, there is a bit of competition for the “first” since both the Spanish, the French and the Dutch established colonies in the “New World” at around the same time.

There was probably turkey at the 1621 harvest feast we celebrate today as the First Thanksgiving. In a firsthand account of the event, settler Edward Winslow said that some men went “fowling”, and we know wild turkey was abundant in that area. But so were ducks, geese, swan(!), crane, deer, and seafood, so likely all these foods made an appearance at the banquet. So why not have some scallops and lobster at your holiday table?

In one of the most impressive episodes in Colonial history, the newly arrived English settlers in Plymoth and the Native Wampanoag people signed a peace treaty in the Spring of 1621. The treaty was facilitated by Squanto, a native man who happened to speak English. (Squanto had been captured and enslaved in England years before, but manged to escape and return home, only to find his entire village had been decimated by a plaque.) The Treaty was a military alliance and specified that both sides would be loyal to each other in case of attack. It also set up a code of conduct so that any person from one group who trespassed against the other would be held accountable. This peace was kept for 40 years until Massasoit died.

HAPPY THANKSGIVING TO ALL!